false light. the most lethal poison

The most important thing that everyone needs to do in these times is to keep their guard up. This sounds like sheer paranoia to those that haven’t experienced the dangers that lurk behind many so called new age beliefs.

To make things even clearer, the term new age is vintage by now as we speak. Whatever fell into the category of new age thought decades ago is now mainstreamed.

Even though only some of these ideas and beliefs are viewed today as fringe quackery, most of it is considered harmless, and quite a bit of it has entered conventional church. Nevertheless these practices, beliefs and ideas exist and are flourishing today.

These concepts and beliefs that I speak of are merely beliefs that are ancient, and have been served to mankind over the centuries to intentionally steer them away from God’s Kingdom. Divination (tarot cards, etc,) ouija boards and other summoning techniques (seance, etc,,) energy healing (frequencies, etx.) and a myriad of theories involving life in the universe are but a few examples of ancient knowledge that has been manipulated, tweaked and presented anew to generations in a disguised dark version that is dangerous.

It is dangerous because in making any of these type of practices a part of one’s life, one is communicating and dealing with intelligence that is unseen.

The whole story behind the fallen angels and the subsequent war that followed their expulsion is a part of our reality in this world if we want a biblical perspective on life on earth.

The dark is both seen and unseen. When seen, it is disguised. When unseen it is stealth. Their mission is to damage God’s Creation and turn God’s children away from God. The dark wants to win over our souls because they hate and despise the God and His Light as much as they hate and despise all that He created . But these dark satanic forces can only operate against us using guile and deception. Therefore, their most common tactic is to operate in an unseen fashion, creating ideas and real life situations and developments that are actually destroying mankind, straying him away from God meanwhile deceiving the human to think that something very positive and helpful is taking place. And all humans who believe that there is no such thing as a satanic force battling God and His Creation with demons in our world realm is then easily deceived by their cunning instrumentations. Believing that there is no enemy in the spiritual realm is a sure way to losing our most valuable Divine essence – our soul.

It is also spelled out for us in the Bible that wrestling with the unseen forces is the greatest peril that a man can face, and thus we need to put on the armor of God.

What makes people think that there is no such thing as the dark and of the evil satanic forces in this world that are here since the fallen angels fell onto this world? False Light. The dark forces use a tactic called false light, making their devices appear to be godlike and to be filled with God’s light and intention. They do this by masquerading as divine beings in dreams and visions. That is why everyone needs to discern – to analyze and judge what they see and hear. One can not automatically assume that if they see or hear anything that claims to be of God that it is from God.

Also, many things presented to us in this world are orchestrated cleverly to present a positive image, that it is for our good, for the sake of mankind, that it is helpful, that it is beneficial. In the methods used to incorporate these demonic orchestrations into our life, be it a vision or a very real component of our society or system, they use words and images that have a religious connotation – such as salvation, saving, moral duty, etc… These are merely triggers to draw people in, knowing that they react instinctively to superficial triggers and rarely dig deeper to see things for themselves. Also, there are always clues and demonic symbols that are cleverly tucked someplace because they never fail to identify themselves subliminally.

We see this in many aspects of our daily life – in entertainment, politics, society and in cultural traditions. 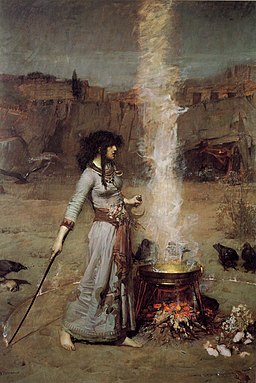